“A temptingly cheap, but tasty one-dayer” – The Telegraph
“A little slice of musical madness in South Devon” – Topman Generations’ Top 25 World Festivals of 2013
★★★★★ – Herald Express
“Quite simply it’s run by the best people, attended by the best people.. and most importantly has the best music!” – James Santer, BBC Introducing in Devon/ BBC Radio Devon
“The whole festival needed an encore” – Music-news.com
“It was so much more than I’d imagined, right from the moment we arrived…” – eFestivals

LEMONFEST is a one-day music festival taking place in the heart of Devon at Newton Abbot’s Racecourse every summer, with live music and DJ’s across six stages. Now moving into their seventh year, LEMONFEST has established itself as South Devon’s premier live music event.

This year’s festival will be held on the 4th June and promises to be their best year yet. With previous years welcoming the likes of BRIT award winner Ben Howard, alternative pop rock trio The Subways and reggae greats Gentleman’s Dub Club, 2016’s impending first line up announcement is sure to have tickets flying out the door.

LEMONFEST is pleased to reveal the first wave of acts for 2016..

New Orleans’ premier purveyors of roof raising, jazz infused, funk and hip hop fuelled marching band music, HOT 8 BRASS BAND can be found at the heart of a current fever for all things brass. Highlighted by their recent Grammy nomination for their striking second album, ‘The Life & Times Of… The Hot 8 Brass Band’, HOT 8 have received immense accolades from local, national, and international media outlets.

HOT 8 will be the first international and Grammy award nominated band that LEMONFEST has ever had.

After winning the UK Beatbox Championship twice in a row, BEARDYMAN né Darren Foreman ploughed headlong into the swirling vortex of musical and technological experimentation before him and has referred to himself in the third person ever since.

Imagine a machine that can let you record and mix music in real time – one that will enable musicians to get down the ideas in their head instantly, with no filter between the germs of a song and hearing it come alive straight away. Imagine the fevered genius capable of building such a perfect musical aid. Meet the BEARDYTRON_5000mkIV (Beardytron). And meet its creator…BEARDYMAN, whose performances have been viewed over 60 million times on YouTube alone with improvisation being at the heart of the creative process.

Exeter born punk n roll quintet THE COMPUTERS announce their return to the festival, with their third album entitled ‘Birth / Death’, due for release in 2016.

The new release shows the band continuing to evolve, finding their own voice and sound and with Alex Kershaw maturing as a songwriter, there are a few unexpected surprises. 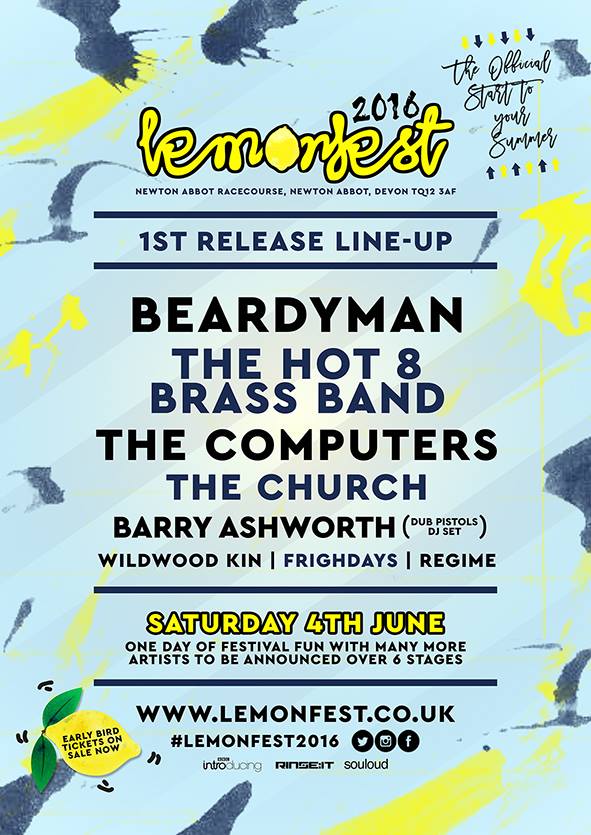